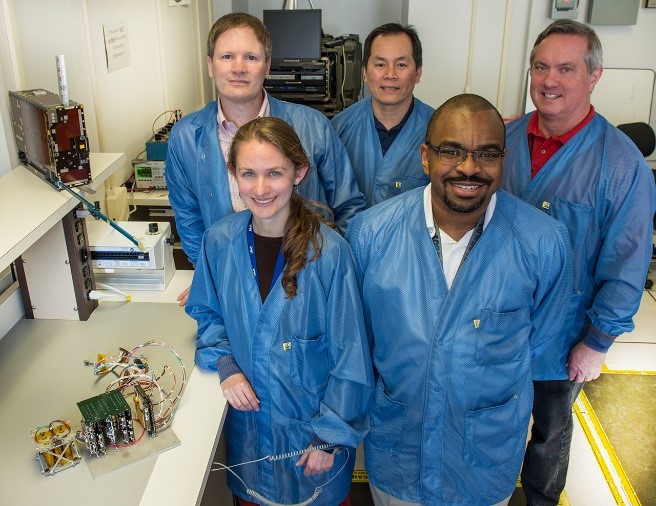 GTOSat is a GSFC 6U CubeSat led by Principal Investigator Dr. Lauren Blum. The mission is funded by the NASA Science Mission Directorate Heliophysics Division. It is being done in collaboration with NASA Langley Research Center (LaRC) the University of Colorado, Boulder, and The Aerospace Corporation Inc. GTOSat’s primary goal is to advance the quantitative understanding of acceleration and loss of relativistic electrons in the Earth’s outer radiation belts. From a low inclination geosynchronous transfer orbit (GTO), the spacecraft will measure electron spectra and pitch angles of both the seed and energized electron populations simultaneously, using a compact Relativistic Electron Magnetic Spectrometer (REMS) and a boom mounted fluxgate magnetometer to obtain 3-axis knowledge of the ambient local magnetic field. These high quality and particle field measurements enable direct measurement of spectral and pitch angle evolution of the outer radiation belt and the calculation of physically significant quantities, such as phase space density (PSD) and its radial gradients, which are necessary to discriminate between radial transport and in-situ modes of electron energization.

The REMS instrument is being provided by The Aerospace Corporation and is an updated version of the MagEIS-Medium instruments that have successfully flown on Van Allen probe spacecraft since 2012. REMS will utilize the same detectors, magnetic chamber and yoke, and front-end electronics as has been previously flown. The miniature fluxgate magnetometer is a GSFC development that has been flown on the Dellingr CubeSat mission. The spacecraft bus is a combination of COTS and in-house built hardware. With the expected exposure of high radiation in GTO, the enclosure design and parts had to be carefully selected in order to meet the design requirement of reducing the mission total dose to under 30 kRads and allowing the spacecraft to be tolerant to single event upsets (SEE). The on-board C&DH processor is an in-house development that is SEE immune. The selected COTS hardware comes from vendors such as Ibeos (EPS and batteries), DHV (solar panels), NewSpace (torquers), MircoAerospace (MEMs gyro), Vulcan Wireless (radio and antenna), and Solar MEMs (coarse and fine sun sensors). The spacecraft structure is combination aluminum (up to 150 mils) and Z-shielding. The Z-shielding is a special composite stack up fiber metal laminates developed by NASA LaRC to provide improved radiation protection at a lower mass than traditional shielding approaches.

Figure 2: GTOSat in its deployed state

GTOSat completed its final design review and is working towards instrument and bus testing. The REMS engineering model boards are in fabrication and the magnetometer and boom are prepared for testing. Bus flight hardware is arriving and a flatSat has been constructed to perform functional tests. Flight software development has been ongoing within the NOS3 simulation environment. GTOSat is targeting a readiness date in the fall of 2021. NASA’s CubeSat Launch Initiative (CSLI) proram is working to find the right launch opportunity for the mission. This has been challenging due to GTO and the need to meet the 25 year mission lifetime requirement. Without having a propulsion system, the right combination of orbital parameters are necessary to ensure a high probability of meeting the requirement. Upon deployment, the mission is designed for at least one year of operations. Communication with be handled through both NASA’s Near Earth Network (NEN) and Space Network (SN). S-band will be used for high data rate downlink with the NEN and constant coverage will be provided using the SN’s Tracking and Data Relay Satellites (TDRS).